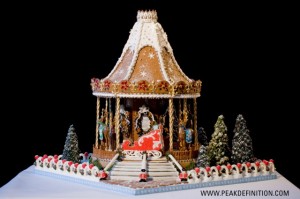 From Grove Park Inn, Billie Mochow from Burns, Tennessee has been named the Grand Prize winner of the 2008 National Gingerbread House Competition at The Grove Park Inn Resort & Spa in Asheville, N.C. Seven judges deliberated for more than six hours on Monday to determine the winners among four categories: Adult, Teen 13-17 and Youth 9 to 12 and Child 8 and under. More than 600 spectators watched the judging process in the resort’s Grand Ballroom. There were a total of 124 Youth, 73 Teen and 203 Adult entries in the 17th Annual National Gingerbread House Competition.

The difference between the grand prize winner, a whimsical holiday carousel by Billie Mochow of Burns, Tenn., and the first place winner, was just a couple points. Mochow’s dedication may have made the difference. She said she ended up having to bake the deer for the carousel 36 times.

Also new: A doubled cash prize for the grand prize winner. Mochow, who won first place last year, took home $3,000 and a two-night stay at the inn. More than $12,000 in cash and prizes were awarded during Monday night’s ceremony. Read More Here. 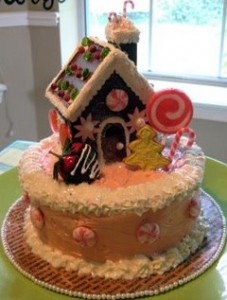 This one is really neat! I came across this Sugar Plum Fairy Gingerbread House Cake and Topper. This one looks delectably sweet and lovely, surely a lovely center piece this would make. Friends and family are sure to admire and eventually find a way to taste this creation. So sweet this one is! 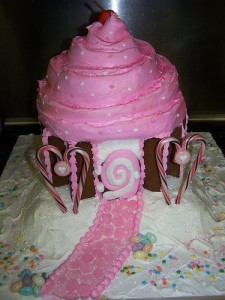 Lots of sweet pink frosting and candy canes decorate this giant cupcake fashioned into a pink Gingerbread House. Creativity comes in many forms and Gingerbread Houses can be made from anything imaginable; cupcakes, cookies, cakes, pies, etc… 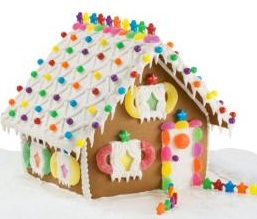 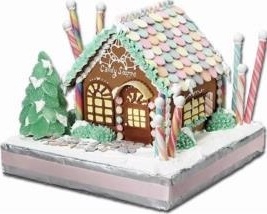 Isn’t this one darling! It is made from a pre-baked Gingerbread house kit. The pre-baked kits usually include the pre-baked Gingerbread pieces, decorating icing, assorted candies, decorating bags and tips, cardboard base and instructions. This particular Gingerbread house is decorated with: Assorted Colored Candy Sticks, White Gum Balls, Pastel Candy Wafers, Pastel Nonpareils Candies, Mini Tart Disc Candies, Marshmallows, Jelly Spearmint Leaves, Striped Gum Sticks, and Sugar Cones.  If this sounds sweet and yummy to you, visit here for instructions! Have fun, this one really is super adorable. 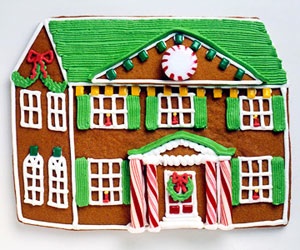 You will love this one and it is not too difficult to make! This is a gorgeous stately Georgian Gingerbread House and true to its heritage it does include Georgian Colonial features: Square, symmetrical shape. Paneled front door at center, Decorative crown over front door, Flattened columns on each side of door, Five windows across front, Paired chimneys and a Pitched roof. Visit here for details BHG to make this lovely Colonial Gingerbread House. 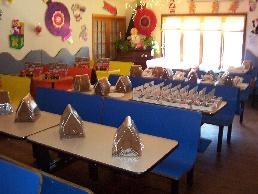 Just happened upon an amazing university that specializes in Gingerbread education! Courses ranging from Gingerbread 101, 210, 301, 401- each designed to teach a different level of Gingerbreadology from basics to creating and decorating masterpieces!
Gingerbreadology 101 – One hour. Always available. Is a most popular activity. Perfect for children, mom’s, grandmas, grandpas & dad’s. Learn to decorate your own pre-baked, pre- assembled deluxe Gingerbread House or other specialty piece. Take home your own “one-of-a-kind” fully decorated, totally edible Gingerbread creation to display or consume! For more information visit the Gingerbread University. 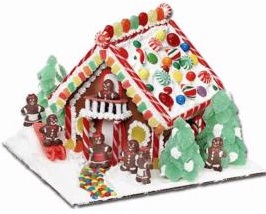 This is the cutest Gingerbread house! Out front are seven Gingerbread kids playing on sleds and waiving from the balcony. The house is surrounded by green gumdrop pine trees with white snowballs. The house roof is colorfully decorated with a variety of flavorful candies and treats. Even the walkway up to the house is a sweet welcoming one and the balcony above is a statement piece of architecture for these Gingerbread kids. The Best of Times will be had for sure with this amazing Gingerbread House creation! Visit here for details. 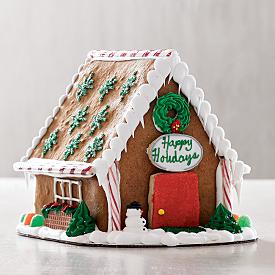 Red Envelope has their ready-to-order custom personalized Gingerbread house at a reduced price available for ordering now. If you do not think you will have time to make your custom creation this year or prefer to buy ready made Gingerbread house then this might be the option from you. The hottest property on the holiday real-estate market is this all-edible, 100% delicious Gingerbread house. It comes complete with a snowman doorman, candy-cane trim and gumdrop landscaping. You will know it’s the right house by the frosting nameplate over the front door. Order soon to ensure Christmas delivery.